Introduction: Postoperative urinary retention [POUR] is the inability to pass urine following surgery despite a painful, palpable or percussible bladder. Postoperative urinary retention has a multifactorial aetiology and is common after anaesthesia and surgery, with a reported incidence of between 5-70%. The ability to void has always been considered as one of the discharge criteria for elective day case surgical patients. POUR can lead to delayed hospital discharges with an overnight stay, resulting in an increased burden on staff, inconvenience to patients as well as financial implications.

Aim: To analyse the perioperative risk factors that contribute to the development of POUR. To determine whether our discharge protocol implemented in 2015 has led to more efficient but safe patient discharges for elective day case surgical patients.

Methods: A 6-month retrospective review of general surgery day case operations [96 cases] performed by a single surgical team from October 1st2016 until March 31st 2017. Data was retrieved from the electronic patient records. The incidence of POUR in both high and low risk groups was assessed We audited compliance with our POUR protocol and the effectiveness of its implementation.

Results: All cases were performed under General Anaesthesia by a single surgical team. POUR occurred in 4.3% of the elective general surgical day cases. The incidence in low risk groups was 2.3% and 5.6% in the high-risk group. This audit has demonstrated that the post-protocol admission to discharge times have decreased significantly, from an average of 397 minutes to 115 minutes for low risk patients and 160 minutes for the high-risk groups.

Conclusion: The incidence of POUR in patients undergoing day surgery was much lower than expected, we advocate our local protocol to enable more efficient patient discharges whilst ensuring patient safety.

Urinary retention is a common complication of surgery and anaesthesia, increased in patients with advancing age following pelvic and anorectal surgeries. Other risk factors for the development of POUR include epidural and spinal anaesthetics and analgesics administered via the epidural or intra thecal route. It is imperative that POUR is identified and managed appropriately. Recommendations for urinary catheterisation in the postoperative period varies widely. It is also governed by local policies. Untreated prolonged POUR is associated with adverse events such as bladder distension, which can result in long-term bladder dysfunction especially in the elderly. In 2015, a voiding discharge protocol for general surgical patients undergoing day surgery based on a retrospective cohort study evaluating outcomes in 616 patients between October 2014 and February 2015 was established in our Department. Data was analysed to assess which patients required an overnight stay and the incidence of POUR in high and low risk groups. An algorithm was developed to guide discharge in low risk groups. [Figure 1] The implementation and use of this protocol was then audited. POUR occurred in 2.6% of the general surgical day cases. The incidence in the low risk groups was 1.28% whilst it was 4% in the high-risk group. Post-protocol admission to discharge times decreased significantly from an average of 397 minutes to 170 minutes for low risk patients and 160 minutes in the high-risk group. There were no re-admissions. Therefore, the authors performed a retrospective study to determine adherence to the protocol and to establish its impact on effective day-case discharges.

Figure 1. Discharge Algorithm for both high and low risk patients. 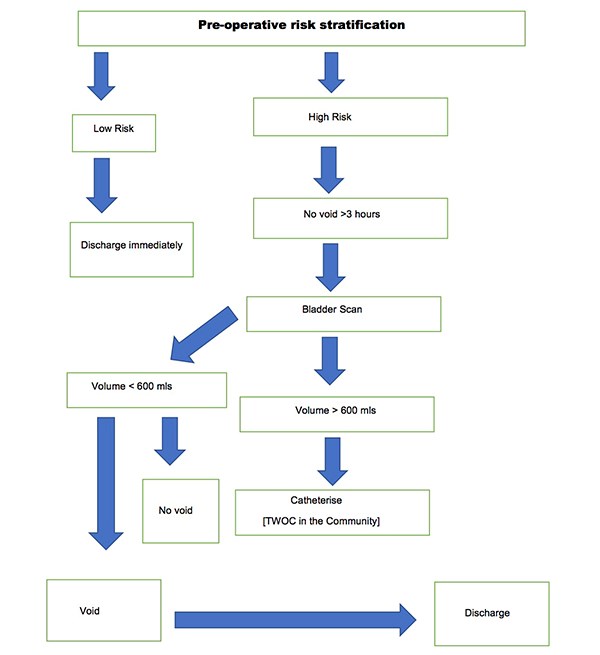 To analyse the perioperative risk factors that contribute to POUR and to determine whether the discharge protocol implemented in 2015 has led to more efficient but safe patient discharges.

A six-month retrospective review of 96 elective general day case operations performed by a single surgical team at Milton Keynes University Hospital from October 1st 2016 until March 31st 2017. Data was retrieved from the electronic patient records. The incidence of POUR in both high and low risk groups was assessed. In our study, high risk groups included men aged over 50 years undergoing inguinal hernia repair or anorectal surgery eg. haemorrhoidectomy. Prostatic pathology such as benign prostatic hyperplasia, cancer and a previous history of urinary retention were documented. In addition, co-morbidities such as diabetes and neurological disease, for example, stroke, multiple sclerosis and parkinson’s disease were noted. Peri-operative medications were reviewed and the use of sympathomimetics, anti-cholinergics, alpha and beta-blockers were recorded. Intra-operative risk factors for the development of POUR were reviewed, including the volume of intravenous fluids administered during anorectal surgery as well as the duration of surgery. Anaesthetic charts were assessed to determine if spinal or epidural anaesthesia was administered. Postoperative risk factors including the use of sedative medications and postoperative analgesia such as a continuous epidural infusion of patient controlled analgesia were noted. Low risk patients for POUR were discharged immediately. Similarly, if high risk patients successfully voided, they were discharged home. High risk patients failing to void three hours postoperatively received a bladder scan. Failure to void, with a bladder volume >600mls required a urinary catheter, followed by a trial without a catheter in the community. Compliance with our POUR Protocol was assessed.

Ninety-six patients were included in the study over a six-month period. There were 43 patients [10 males, 33 females] in the low risk group. All individuals were aged less than 50 years. [Figure 2] Co-morbidities included one patient with type two diabetes and there were no individuals with a significant urological history. All patients underwent General Anaesthesia, induced with propofol and maintained with sevoflurane. Epidural or spinal anaesthesia was not required in this cohort. 53 patients [males 39, females 14] were identified as high risk for the development of POUR. In the high- risk group, 19 individuals were aged above 50 years. Two patients were diabetic and no patients had a urological history. [Figure 3]

Figure 2. 43 individuals were identified as low risk for the development of POUR.

Figure 3. 53 individuals were identified as high-risk for the development of POUR.

Figure 4.  The operations performed in both the high and low risk groups.

Urinary catheterisation was required for three individuals in the high-risk group due to an inability to void, despite an ultrasound scan confirming >600mls in the bladder. In the low-risk group, one catheter was inserted due to a painful, palpable bladder. [Figure 5] All cases required intermittent in and out catheterisation. The average time to void in the high-risk group was 160 minutes and 115 minutes in the low risk group.

Following implementation of the POUR discharge protocol in 2015 there has been a significant reduction in the admission to discharge times in both the high and low risk groups. [Figure 6]

Figure 6.  The pre and post intervention admission to discharge times.

Following our successful retrospective cohort study which proved that the incidence of POUR in patients undergoing day surgery was much lower than expected, we advocate our local protocol to enable more efficient patient discharges whilst ensuring patient safety. Our protocol has shown to significantly reduce time spent in the day surgery unit therefore saving bed-hours and avoiding patient inconvenience. The authors plan to continue collecting data and ensure compliance with the protocol.

Postoperative urinary retention [POUR], defined by Baldini as the inability to void with a full bladder is a common complication of surgery and anaesthesia1. It has a reported incidence of between 5-70%, although the true incidence is unknown due to the lack of defining criteria. Firstly, it is important to understand the physiology of micturition. The detrusor muscle forms the body of the bladder and the neck has an internal layer of smooth muscle surrounding the internal meatus of the bladder, known as the internal urethral sphincter1. Multiple afferent and efferent neural pathways, reflexes, central and peripheral neurotransmitters are involved in the control of micturition. The adult bladder has a urinary capacity of 400-600mls. Two phases, the storage and emptying phase can be distinguished during micturition. At 150mls, the first urge to void is felt and the tension receptors are activated at 300mls leading to parasympathetic neuron activation and contraction of the detrusor muscle. When the intravesical pressure reaches the voiding threshold, the detrusor contractions increase in intensity, frequency and duration, allowing the bladder to empty.

The risk factors for developing POUR include advancing age, with men aged over 70 years appearing to have a higher incidence. Indeed, age related progressive neuronal degeneration leads to bladder dysfunction2. Mechanical obstruction of the urinary outflow tract causes urinary retention in the postoperative period. In addition, altered neural control of the bladder as well as the detrusor mechanism is another cause3. Other pre-operative risk factors include co-morbidities such as neurological disease, diabetes mellitus as well as the use of pharmacological agents such as anti- cholinergics, sympathomimetics, alpha and beta blockers. The type of surgery performed is also significant with an increased prevalence reported in abdominal, pelvic and orthopaedic surgery. In patients undergoing anorectal surgery, a high incidence of POUR is observed. This is caused by injury to the pelvic nerves and an increase in the tone of the internal sphincter caused by the pain evoked reflex4. A urological history including obstructive uropathic symptoms or prostatic enlargement are other independent risk factors. Furthermore, general anaesthetic agents and opioid analgesics cause bladder atony by interfering with the autonomic nervous system. Propofol impairs the micturition reflex and reduces detrusor contractility4. In addition, spinal anaesthesia has an effect on the pontine micturition centre and acts on the sacral spinal cord segments S2-S4. The use of long-acting local anaesthetics is related to a higher incidence of POUR5. The use of patient-controlled analgesia also increases the probability of urinary retention. Opioids increase the tone and range of contractions of the urinary sphincter, but diminish contractions of the urethra making spontaneous urination difficult6. As well as this, the use of fentanyl makes it difficult for individuals to void spontaneously because it inhibits the reflexes below the level of the epidural lumbosacral puncture. Other predictive factors of early postoperative urinary retention include intra-operative risk factors such as longer duration of surgery and administration of >750mls intra-venous fluids. Excessive infusion of intra-venous fluids can lead to overdistension of the bladder especially in patients under spinal anaesthesia4.

It is important to evaluate and treat the underlying cause of POUR before proceeding with catheterization. Conventional clinical indicators of POUR include pain and discomfort on palpation and percussion of the lower part of the abdomen. Ultrasound has been used as a diagnostic tool for postoperative urinary retention. To avoid long-term detrusor muscle damage and bladder atony, urinary catheterisation is advised for bladder volumes >600mls1. Either intermittent in-and-out catheterisation or an in-dwelling urinary catheter to treat POUR and decompress the bladder with early removal once the patient is mobile is advocated. A potentially serious adverse effect associated with POUR is bladder overdistension and it has a reported incidence of 44%7. Untreated POUR that is prolonged can result in hydronephrosis and the possibility of kidney damage leading to chronic kidney disease. Other associated adverse effects include bradycardia, hypo or hypertension resulting from an overdistended bladder8. According to Johansson, 80% of hospital-acquired urinary tract infections are caused by an indwelling urethral catheter9. Other potential complications associated with urinary catheterisation include urethral trauma, prostatitis, pain, discomfort and detrusor overactivity.

Postoperative urinary retention has implications for health care associated costs and morbidity would also theoretically be increased with secondarily acquired infection. Perioperative risk factors for the development of POUR such as advancing age and diabetes mellitus should be identified. Our protocol has shown to significantly reduce time spent in the day surgery unit therefore saving bed- hours and avoiding patient inconvenience.

Cite this article as https://daysurgeryuk.net/en/resources/journal-of-one-day-surgery/?u=/2017-journal/jods-274-2017/postoperative-urinary-retention-pour-in-elective-day-case-surgical-patients/