Physicians’ Assistants in (Anaesthesia) [P’A-(A)] have worked as qualified practitioners in the Heart of England Foundation Trust (HEFT) since January 2007 and within this, they have worked within in a two to one model of supervision, where one consultant in anaesthesia supervises P’A-(A) within the same theatre suit. However, in the United Kingdom (UK) National Health Service (NHS) there has been no formal evaluation of patient satisfaction of anaesthetic outcome comparing to a physician only delivered anaesthetic. This study seeks to obtain a valuable ‘snap shot’ of patient satisfaction with the P’A-(A) service and the team approach to anaesthesia.

A patient questionnaire was developed using the Delphi Principle (see Appendix (i)).  Ethical approval with gained from HEFT ethical committee and the study ran during November and December 2016. The study focused on Day Case theatres at Heartlands Hospital and Solihull Hospital, which are both part of HEFT. The day case theatre in Heartlands Hospital is a standalone facility and does not lend itself to the model of two to one working. Anaesthetics within this theatre are delivered by consultant anaesthetic staff. However, within Solihull Hospital there are two adjacent Day Case theatres which use the two to one working model from Monday to Friday.  One hundred questionnaires were sent out; fifty to patients receiving Day Case anaesthetics from a consultant only and fifty to those patients receiving an anaesthetic from a P’A-(A) with consultant supervision operating the two to one model of working. The questionnaires were given to the patients prior to their discharge home by the Day Case nursing staff and neither the control nor study group were informed of the data collection been undertaken. A direct comparison of patient reactions to the anaesthetic service they received was elevated and the results for each of the questions shown in Appendix (i0 were statically analysed using the Chi Square Test.The research author simultaneously conducted a literature review of academic text from the UK, Canada and the United States of America (USA) to ascertain currently published patients satisfaction with P’A-(A) and Physician Associate (PA) professions. This was carried out to identify current themes and levels of patient satisfaction with such professional groups both within the UK and internationally.

The Chi-squared test was then applied on each of the ten questions seen in Appendix (i). The Chi-squared test is a statistical test used to determine the significance of data obtained and determine the correlation between them.  In this experiment, the difference in variable was analysed, and the data sets obtained from the two sets were compared.

The questionnaires returned yielded various findings.  Within the physician only group forty-nine of the fifty questionnaires were returned. Two were incorrectly completed so forty-seven were used in the analysis. Within the P’A-(A) forty-eight were returned and two were incorrectly completed thus forty-six were used in the study. For each of the ten questions no statistical significance could be found between those patients who received an anaesthetic from a consultant only anaesthetic physician and those who received an anaesthetic from a P’A-(A) The literature review considered academic text from the past ten years and made use of CINAHL, MEDLINE, The Cochrane Library, NICE evidence, British Nursing Index and PubMed. No reference was found to patient satisfaction following care delivered by a P’A-(A).Twenty-five texts were identified where evaluation of PA and Nurse Practitioners had been studied. Out of these, sixteen articles were subsequently evaluated as they focused solely on PA’s; fourteen were published North America and two in the UK. These studies showed high levels of patient satisfaction with PA in both primary and secondary care settings.

This study provides a valuable insight into patient perceptions following delivery of Day case General Anaesthesia both form Physician only provider and those who received care form a P’A-(A) however, further work is needed to fully gauge patient acceptance of P’A-(A) and a multiple-centre study would show the benefit in patient perception allowing for the diverse nature of current P’A-(A) practice within the UK. 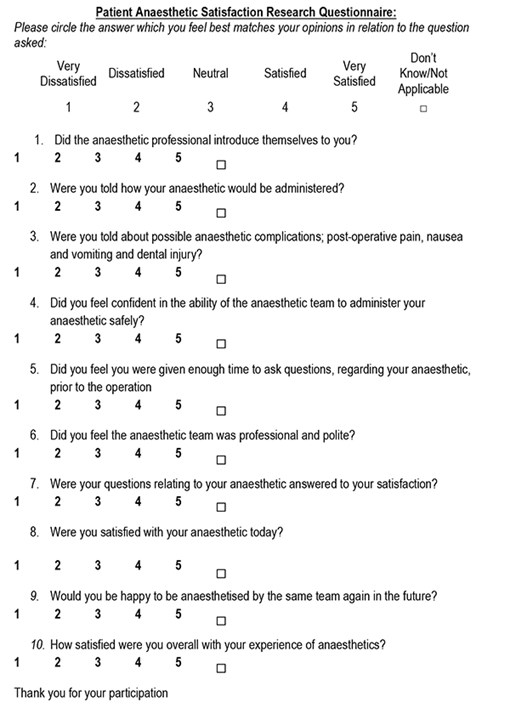 Cite this article as https://daysurgeryuk.net/en/resources/journal-of-one-day-surgery/?u=/2017-journal/jods-274-2017/patient-satisfaction-with-physicians-assistants-anaesthesia/