The authors wish to acknowledge and thank Georgina Jones, Professor of Health Psychology at the School of Social Sciences at Leeds Beckett University for her assistance with statistical analysis.

No funding was received and there are no conflicts of interest.

Methods: A hospital database review identified the number of patients treated at the hand centre with a length of stay of more than 0 days, or readmission within 48 hours.  The patient records were analysed for factors which may indicate the need for an overnight stay.  Reasons for admission were recorded.  Changes were made to post-operative analgesia and patient information leaflets.  Regional block techniques were refined and more widely used.  The process was then repeated to establish the efficacy of the changes.

Results: From April 2012 to March 2014, 4407 patients were admitted to the hand centre.  Sixty-six had an unplanned overnight stay or readmission (1.50%).  Common reasons were pain and post-operative nausea and vomiting.  After the changes were implemented, a repeat review from April 2016 to June 2016 identified 886 admissions with only 3 having an unplanned overnight stay (0.34%).

Guidance introduced by the UK Department of Health recommends that 75% of elective surgery should be undertaken as a daycase with an unplanned admission rate below 3% (1).  Unplanned admissions and readmissions after daycase surgery are undesirable from both the patients’ and the healthcare provider’s perspective for financial, operational and quality reasons. Daycase surgery is preferred by the majority of patients due to convenience, reduced requirement for social arrangements, and a reduction in the likelihood of acquiring a nosocomial infection (2-4).  Avoiding an overnight stay results in a significant saving for healthcare commissioning groups.

The aim of this study was to assess the rate of unplanned admissions and readmissions after daycase hand surgery at a tertiary referral adult hand centre.  The centre is based in a UK teaching hospital serving a local population of 500,000 and an extended catchment of 3 million, where the majority of elective and trauma work is carried out on an ambulatory, same day discharge basis.  Improvements to the service to reduce these rates were sought.

The first phase of the study was to carry out a retrospective review of performance. All patients admitted under the care of hand surgery consultants over a two year period (1st April 2012 to 31st March 2014) were identified from the hospital databases. Those with a length of stay (LOS) greater than zero days were identified and each case investigated. ‘Daycase’ was defined as admission and discharge on the same day (i.e. no overnight stay). Patients with planned overnight stay as per their operation note and incorrectly recorded cases of overnight stay were excluded.

Routine admission was anticipated for patients undergoing total wrist arthroplasty, brachial plexus surgery or those requiring inpatient neuro-rehabilitation post-operatively.  Trauma patients requiring intravenous antibiotics, observation of neurovascular status and monitoring for the development of compartment syndrome were also considered planned admissions and therefore excluded.  Those who had been discharged on the day of surgery but then readmitted within 48 hours were also identified and included.

Electronic and paper case notes were scrutinised for demographics and details surrounding the care episode (figure 1).  Data were analysed with the assistance of a statistician and Chi-squared tests were carried out using SPSS. 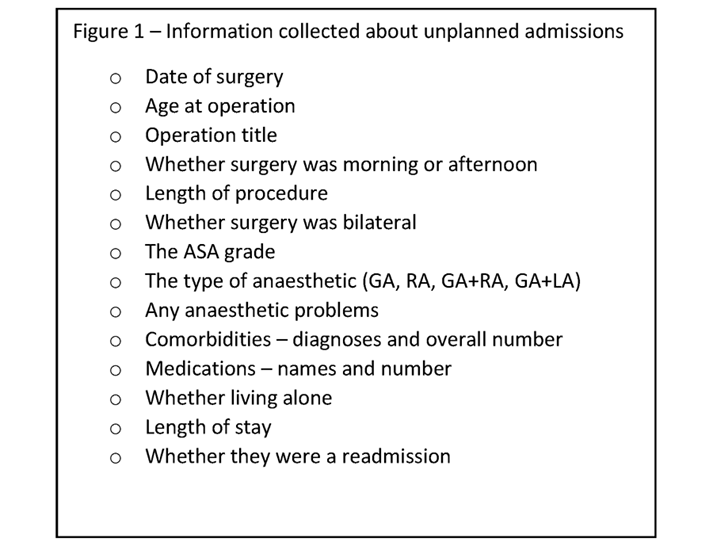 The first phase identified post-operative pain as the main reason for unplanned admission.  The following strategies were formulated in collaboration with colleagues in anaesthetics to mitigate this problem:

The second phase of data collection was then carried out in the same way as the first, for a three month period, after the interventions to assess their effect. 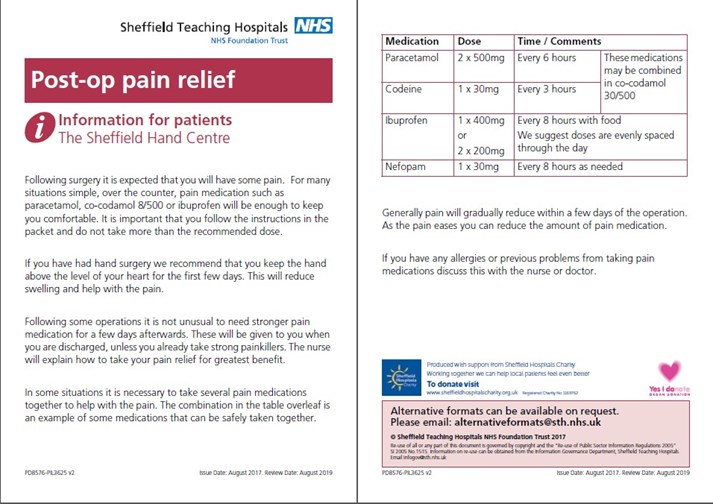 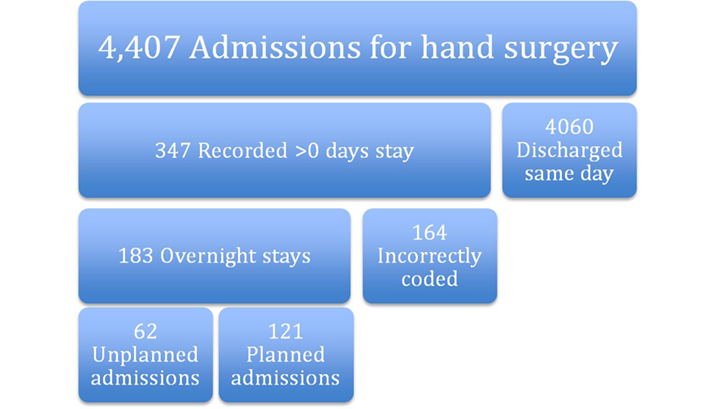 Time of surgery is shown in table 3.  Operations carried out in the afternoon were markedly more likely to result in an unplanned admission. However, the day of the week was not linked to likelihood of admission (table 4).

The type of surgery had a clear influence on unplanned overnight admission. The total number of unplanned admissions per operation, or type of operation, is presented in Table 5 along with the total number of those procedures carried out by the Hand Service during that period. Statistical analysis reveals that Ulna Shortening, Brunelli Ligament Reconstruction, Corrective Osteotomy (all) and Open Reduction Internal Fixation (ORIF) (all) each had a significantly higher chance of being admitted (p value <0.01). Soft Tissue Procedures have a significantly lower risk of unplanned admission, p <0.01.

Table 5 – Rate of Admission by Type of Surgical Procedure. 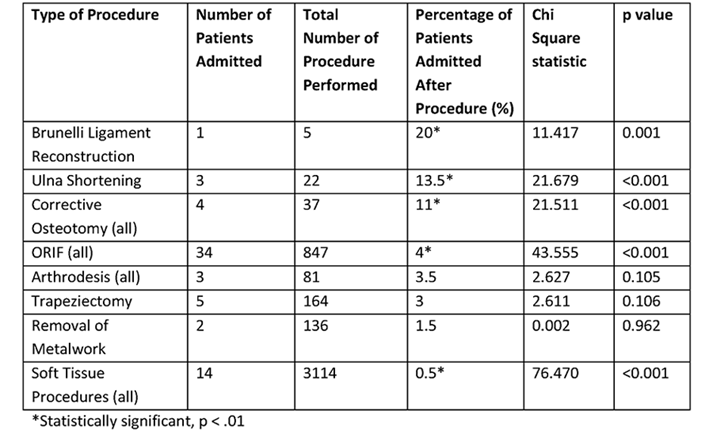 The type of anaesthetic received by these patients is shown in Table 6. In the unplanned admission group, GA represented all or part of the technique for 61% of patients. Data regarding combined anaesthesia (GA with RA or local anaesthesia) is not recorded in a format that can be easily retrieved and assessment of large numbers of successful day case hand surgery patients was not feasible. During the initial study period 20% of all hand surgery patients received a general anaesthetic (GA).

To evaluate the changes in practice, the second phase was carried out from April to June 2016. During this period 886 patients were admitted to the hand centre for hand surgery (figure 4). This number is similar to the number admitted in April-June 2012 and April-June 2013 (during the first phase), accepting a gradual increase in the activity of the unit over time. Of these, 31 were coded as having a length of stay greater than zero days. There were only four coding errors in this sample. The rate of coding errors reduced from 3.6% in 2012-14 to 0.45% in 2016. 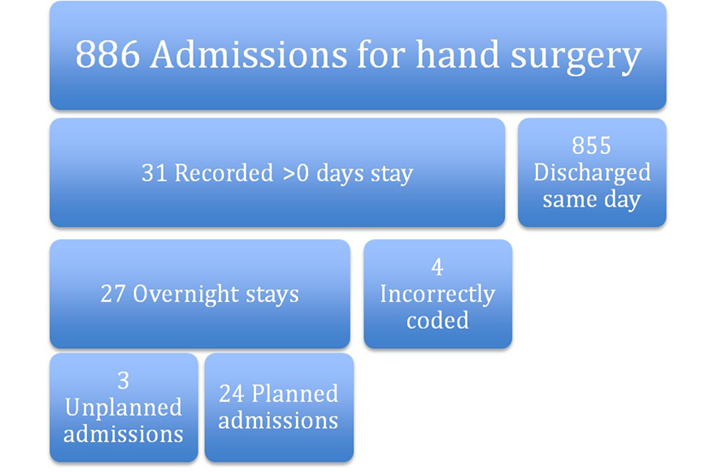 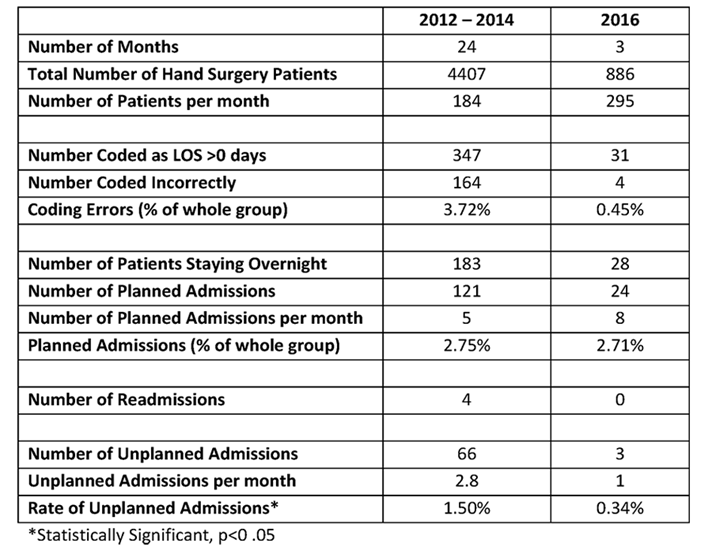 Phase one of the study identified that almost half of unplanned admissions were attributed to inadequate pain control.  This is in keeping with other studies which also cite bleeding and post-operative nausea and vomiting (PONV) as common reasons (5-13).  The changes implemented regarding anaesthetic techniques and post-op analgesia contributed to the improved rate of successful daycase surgery.

Procedures on bone were more likely to result in unplanned admission.  In a hand surgery cohort, Goodman et al found more invasive surgeries had higher complication rates (9).  Other studies have found that the type of surgery undertaken, and the specialty delivering the care, have a profound effect.  General surgery, urology and gynaecology are associated with higher rates of admission (6, 10, 14).  Rates of unplanned admission can be as high as 30% (11) for procedures such as laparoscopic cholecystectomy, whereas for orthopaedic day cases, rates tend to be much lower.  Cardosa et al published a 1.07% admission rate in daycase knee arthrosopy patients at an orthopaedic centre (15).  Minatti et al found a post-discharge admission rate of 1% within 30 days, halving to 0.49% when only including the orthopaedic cohort (14).  Our rate of 0.34% in phase two of our study is compares favourably to other published studies, partly due to the suitability of regional and local anaesthesia in hand surgery and the minimal impact on patient mobility.  Goodman et al found an even lower rate of 0.15% based on a 30 day reoperation and/or admission rate in an elective hand surgery population (9).  The majority of their admissions/operations happened in the second post-operative week and these were mostly due to infection.  This usually takes longer than 48 hours to present, and therefore there may be a group of patients in our cohort who were admitted later than 48 hours post op and are therefore not identified by our study.  Furthermore, some complications can present much later such as tendon rupture.

Lack of suitable social support can sometimes prevent safe discharge – accounting for 5 cases of unplanned admission in this study – but this can usually be pre-empted and suitable arrangements made.  Others have also found social reasons to be a factor in unplanned admission (5, 10, 12, 13, 16).

Some of our patients may have had a minor complication and presented to their general practitioner rather than the hospital, and these patients would not have been captured by the study.

We found no particular trends in patient factors such as age, ASA grade or number of comorbidities in the admitted group.  In contrast, Soler-Dorda found age >65, and Minatti age >90 to be statistically significant risk factors (11, 14).  An ASA greater than 2 has been associated with higher admission rates (11, 12).

Our study is limited by the lack of a control group, which would more robustly have identified risk factors for admission.  We studied readmission rates at 48 hours post-discharge.  This identified early post-operative problems such as pain and nausea, but will not have captured infections as these will generally represent later.  We did not set out to establish infection rates, which are known to be low in hand surgery in general (9).

The cost of our interventions was minimal.  The development of a patient information leaflet cost very little, and the majority of patients buy their own ibuprofen over-the-counter.

Coding errors have reduced in our unit thanks to a new patient administration and tracking system. Patients are discharged or transferred electronically, reducing the potential for errors, improving the information available to general practitioners and other healthcare providers and providing a more robust audit trail.

Low cost improvements in post-operative pain control and anaesthetic techniques resulted in a demonstrable improvement in unplanned admission/readmission rates in our centre.  Similar interventions could be undertaken in other units for the mutual benefit of patients and healthcare providers.

Cite this article as https://daysurgeryuk.net/en/resources/journal-of-one-day-surgery/?u=/2019-journal/jods-293-august-2019/successful-strategies-to-expand-the-scope-of-day-case-hand-and-wrist-surgery-and-avoid-unplanned-admissions/