Conflict of Interests and Disclosures

The study protocol was approved by the local research and clinical effectiveness department.

Methods: The study group consisted of 15 females and 5 men, with a mean age of 48 years. Demographic data, analysis of presenting symptoms, previous treatment, time to diagnosis and provocative tests was undertaken. Intra-operative findings were recorded. At follow-up of 12 months an overall outcome of treatment including pain, function and satisfaction was evaluated.

Results: 17 patients (85%) had an excellent or good outcome, 2 patients had a fair result and one patient had a poor result with continual shoulder and neck pain, paraesthesia in the same limb. At final follow-up most had complete relief of pain, 2 had mild pain, one on lifting heavy objects and one on continual typing. All in work resumed their jobs. There were no wound infections.

First described by Runge in 1973[1], tennis elbow (TE) is suggested as an overuse injury involving eccentric overload at the origin of common extensor tendon particularly of the Extensor carpi radialis brevis (ECRB) [2,3]. TE is characterized by triad of lateral epicondylar pain, pain on resisted wrist extension and absence of other pathologies (2, 4). It commonly occurs mainly in those aged from 35 to 55 years, with an equal gender distribution [4, 5]. Pathophysiologically it is considered to be a focal hyaline degeneration within the fibres of common extensor origin [5, 6] especially of ECRB. There are features of angiofibroblastic hyperplasia micro tears of the origin of ECRB [7]. TE is considered to be a self- limiting condition with most responding to conservative means [4]. Conservative treatment includes physiotherapy and eccentric exercises, shock-wave treatment, laser therapy, acupuncture, elbow straps, injections of local corticosteroid, botulinum toxin and autologous blood or platelet-rich plasma [5]. Various differing operative techniques including both open and arthroscopic methods have been described [4, 5, 6, 8]. Roles and Maudsley (1972) put forward a hypothesis that chronic tennis elbow pain could be because of the entrapment neuropathy of the posterior interosseous nerve (PIN) and coined the term resistant tennis elbow (RTE) [9]. However, van Rossum et al [10] concluded RTE could not be explained by entrapment neuropathy and the role of surgical exploration was unfounded. Henry and Stutz [6] highlighted the possibility that the 2 clinical entities of TE and RTS may in fact represent an integrated pathology. They suggested that treating both pathologies together may improve pain and function in patients suffering from RTE.

We evaluate the effectiveness of unified tennis elbow and radial tunnel release surgical approach in the management of RTE in this study.

We carried out a retrospective study of all patients over the age of 18 years who underwent the unified tennis elbow and radial tunnel release procedure for treatment of resistant tennis elbow at our unit with a minimum of one year follow up. The study protocol was approved by the local research and clinical effectiveness department.

All patients over the age of 18 years referred to our upper limb unit with chronic persistent lateral elbow pain from triage services between January 2008 and December 2013 were included in the study. None of these patients underwent nerve conduction studies. The Resistant Tennis Elbow (RTE) was a clinical diagnosis.  The Rule-of-nine test helped increase diagnostic accuracy of this condition when the posterior interosseous nerve (PIN) in the radial tunnel was involved [11].  Data was collected from Electronic Patient Records (EPR-Evolve), Patient Archived Computer system (PACS), operative theatre log book, physiotherapy assessments and discharge summaries. All patients underwent routine pre-operative anaesthetic assessment. The surgery was carried out by a senior surgeon as a day case surgery on a short surgical stay unit under general anaesthetic with use of an arm tourniquet.

We collected demographic data including age, sex, hand dominance and occupation. Symptoms and examination findings at clinic presentation, time until diagnosis of resistant tennis elbow in the unit, any treatment prior to referral was noted. Specific tests for tennis elbow and radial tunnel syndrome including Rule of nine test were performed. Pain was assessed using Visual Analogue Scale (VAS). Intra-operative findings were recorded for clinical correlation. The patients were followed up in the clinic at 6 weeks, 3 months and 12 months following surgery for assessment. We also administered patient satisfaction questionnaire at follow-up and the overall outcome of treatment was rated using the grading system developed by Verhaar et al [8] (Table 1). 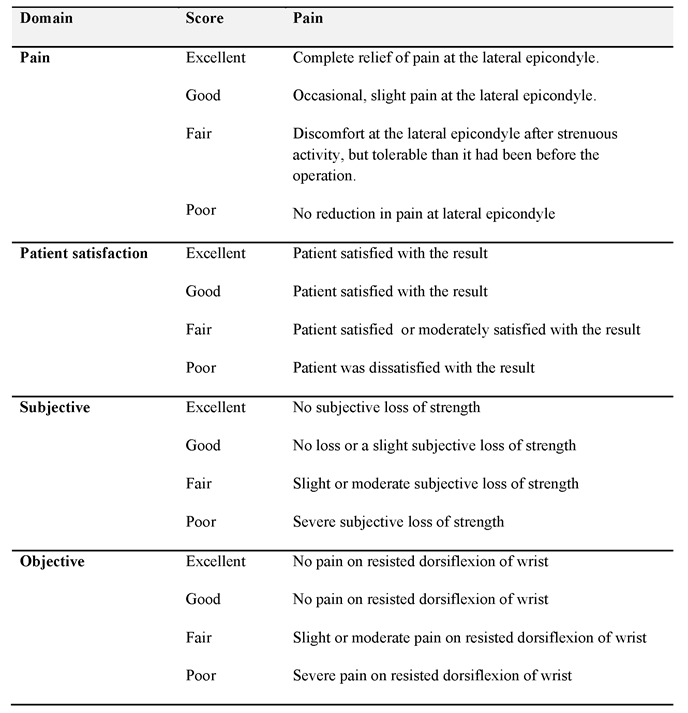 The affected arm was supported on an arm table. Using the modified Thompson’s approach a 4 centimetre longitudinal incision was placed over the proximal radial shaft of the affected elbow. Under 3.0 x loupe magnification the interval of Extensor carpi radialis brevis (ECRB) and Extensor digitorum communis (EDC) musculature was developed. We specifically noted and documented intra-operative thickness of ECRB & EDC fascia's, thickness and tightness of the proximal border of supinator, the bulk of the supinator muscle and features of posterior interosseous nerve (PIN) entrapment. Thickened fascia’s of ECRB and EDC was released to reduce traction on ECRB and EDC.  A one centimetre gap was noted to be adequate to release the traction on these two muscles and the common extensor origin. The PIN was located at superior border of supinator and traced proximally and distally. The whole length of the radial tunnel was released, making sure the complete division of superior border of supinator, its Arcade of Frohse and inferior border of supinator. Fascial covering of superficial part of supinator was divided along the PIN path. Bipolar diathermy was used to achieve haemostasis. The wound was closed in layers using absorbable sutures.

The elbow was dressed with wool and crepe bandage and supported in a poly sling. The patient was safely discharged home the same day with regular analgesia and post-operative instructions.

A standardised rehabilitation protocol under the supervision of physiotherapists at regular intervals was used.  This was divided in 3 phases. The first phase in the first two weeks suggested use of regular analgesia, use of cryotherapy of the elbow, avoidance of lifting heavy objects with the arm, silicone patch over the scar whilst the scar matures. The intermediate phase consisted of scar mobilization with composite stretching of the ECRB and EDC muscles. Combined position of elbow extension, forearm pronation and wrist flexion exercises (hourly exercise and 10 repetitions per session) was undertaken. Strengthening of forearm is only begun after the full composite stretch can be comfortably performed (usually 4-6 weeks post-operatively). The third phase consists of progressive strengthening from week 6 to week 8. This standard progression of  first achieving elbow full range of movement and composite stretch, progressive strengthening exercises with final aim of return to full activity is planned over a period of 4 months.

The values of assessed parameters were collected. Anonymised data was recorded onto a data collection sheet on Microsoft Excel on a password-protected computer. A descriptive analysis and outcome assessment was undertaken.

A total of 15 women and 5 men, aged from 40 to 62 years (mean 48 years) underwent unified tennis elbow and radial tunnel release procedure for treatment of resistant tennis elbow. Seven patients underwent surgery on the non-dominant side. No patient was able to provide hints to suggest a specific cause, though four patients correlated the condition to an injury sustained. Three patients had desk jobs, one patient was retired and the rest had fairly manual jobs. (Table 2). 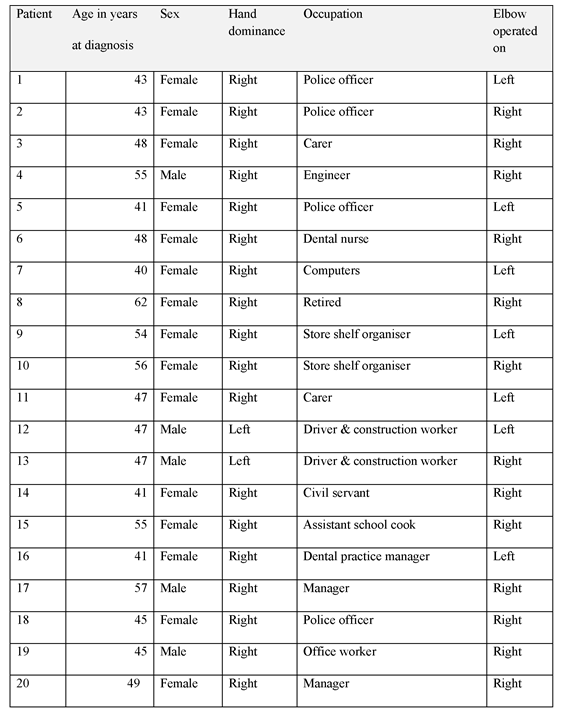 All patients suffered long standing pain located at the lateral epicondyle with symptoms of weakness and pins and needles along the forearm in variable instances. The duration of symptoms before referral to our unit varied from 6 months to 48 months (mean, 18 months).

Despite various non operative treatments including analgesics (all 20), physiotherapy (13/20), elbow supports (15/20), local steroid injections (13/20) ultrasound therapy (2/20) and  acupuncture (7/20) had been undertaken,  all patients still had symptoms which continued to interfere with activities of daily living.

There were consistent features of lateral epicondylar and proximal forearm tenderness with positive provocative tests. The rule of nine test, resisted wrist dorsiflexion test and middle finger test was positive in 18/20 (90%), 18/20 (90%), and 17/20(85%) respectively.

The ECRB and EDC fascia was invariably found to be thickened in most cases. Along with this the superior proximal border of the supinator, Arcade of Frohse and sometimes the lower border were tight in all patients.

The overall outcome as graded by Verhaar system revealed a good to excellent result in 17 patients (85%), fair in 2 patients and poor in one patient. The poor result was in a lady with shoulder and neck pain with paraesthesia in the affected limb.  The 2 patients in the fair group had discomfort at the lateral epicondyle after strenuous activity (continual typing, lifting heavy objects), but more tolerable than before the operation.

At the final follow-up review, 17 elbows were painless, one patient had mild pain after lifting heavy objects at his manual work, one had pain on continual typing only and one had shoulder and neck pain with paraesthesia in the affected limb. Subjectively 19 patients (95%) were satisfied with the final outcome. All elbows had full range of moment and were stable.

All wounds healed at the time of six week review. There were no wound infections. However one patient had mild scar tenderness which settled with local massage, desensitization therapy at final review. Another patient had numbness distal to the scar but this did not affect her activities of daily living.

Both tennis elbow and radial tunnel syndrome are distinct entities and treated as such. However, a subset of patients treated for lateral elbow pain amongst these exists who are not improving with conventional treatment and present a diagnostic dilemma.

ECRB and to a lesser degree a portion of the EDC are known to be responsible for excessive traction inducing lateral epicondylar tendinosis and micro tears [5,6,7]. The supinator, primarily the proximal thickened tendinous edge also known as Arcade of Frohse is responsible for posterior interosseous nerve compression (PIN) in the tunnel [12, 13]. However to lesser extent the superficial bulk of supinator muscle which blends with the thickened ECRB also appears to cause some element of PIN compression as evident with two of our consistent intra-operative findings of thickened ECRB fascia and tight superior border of supinator muscle which was released during the surgery.

The diagnostic dilemma is due to overlapping features amongst both the conditions. TE is identified primarily by local lateral epicondylar tenderness and positive provocative tests such as pain on resisted pronated wrist dorsiflexion and middle finger extension [4, 13]. RTS on the other hand refers to pain in the proximal forearm distal to lateral epicondyle and similar positive provocative tests. Henry and Stutz [6] have pointed out that clear and convincing data has not been brought forward to uniquely identify or differentiate TE form RTS in isolation by some of these tests.

As noted by P K Tan et al [14], all of the patients had a conservative treatment prescribed and undertaken prior to referral to our unit. Most of these patients were seen and treated in primary care or musculoskeletal triage clinics usually with physiotherapy or local steroid injections. The mean duration of symptoms before referral to our unit until diagnosis of RTE was about 18 months. Such a delay probably reflects the diagnostic dilemma faced by treating clinicians.

In considering surgical option for treatment of RTE, we need to address both pathologies contributing to RTE. Our consistent intra-operative findings of thickened ECRB fascia and tight thickened proximal supinator border and also a thickened supinator musculature in some cases confirms our belief that RTE is probably a unique combined pathology.

Our finding of 85% good or excellent post-operative result based on Verhaar et al grading and 95%subjective satisfaction supports our philosophy of treating RTE as a dual pathology in the same elbow.

The Unified tennis elbow and radial tunnel release approach presents a unified approach to treat both of these co-existing pathologies simultaneously. This retrospective study supports the rationale of releasing of traction on extensor carpi radialis brevis and release of posterior interosseous nerve entrapment to treat resistant tennis elbow using a single incision technique.

Cite this article as https://daysurgeryuk.net/en/resources/journal-of-one-day-surgery/?u=/2019-journal/jods-293-august-2019/resistant-tennis-elbow-effectiveness-of-unified-tennis-elbow-and-radial-tunnel-release-procedure/