Outpatient and daycase hysteroscopy and polypectomy are widely recognised methods for the treatment of endometrial polyps. There have been concerns regarding pain affecting satisfaction and tolerability of the outpatient procedure.

We conducted a service evaluation of our outpatient hysteroscopy and polypectomy (OPHP) and compared it with our daycase procedures, which has shown excellent success rates and overall good satisfaction for both the services.

Abnormal uterine bleeding accounts for as many as one-third of presentations to gynaecologists and requires further evaluation to establish a diagnosis in the most efficient and least invasive manner possible1, 2. Endometrial polyps are one of the major causes of abnormal uterine bleeding (AUB). The incidence rises steadily with the increasing age, peaks in the fifth decade of life and gradually declines after the menopause3. Hysteroscopy is considered the gold standard method for diagnosing the endometrial polyps. Endometrial polyps associated with AUB necessitate their removal and sometimes they may harbour malignancy as well (1-1.6%)(4). Despite the increasing popularity of office hysteroscopy, routine hysteroscopy is still performed in an operating theatre and require anaesthesia and hospitalization4.

In the UK, Royal College of Obstetricians and Gynaecologists (RCOG) recommends there is increased need for one-stop clinics where diagnosis and treatment can be done simultaneously. The Department of Health in the UK aims to provide two-week wait clinics for all suspected cancers to provide better services and to make or refute the diagnosis of endometrial cancer earlier. Office based diagnostic/therapeutic hysteroscopy is pivotal in providing these services.

Our aim was to evaluate the outpatient and day case hysteroscopy and polypectomy services by determining patient satisfaction, treatment outcomes, efficiency and cost-effectiveness of both services.

All patients over a period of October 2012 to April 2014 who had polyp confirmed on ultrasound scan, and who were booked for hysteroscopy & polypectomy were approached. Ethical approval was not needed as per advice from our local ethics committee as it was considered a service evaluation. The data was collected prospectively regarding patient demographics, indication for referral, menopausal status, operating time, complications, and failure rate, type of analgesia, number & size of polyps removed, recovery time and duration of inpatient stay.

All patients had pre-assessment for suitability of the procedure for both LA and GA. All the women who presented with abnormal uterine bleeding had an ultrasound scan performed. Those women who were referred for OPHP procedure had polyp first confirmed on diagnostic outpatient hysteroscopy and then booked for the procedure slot. This was done to ensure the maximum utilisation of procedure slots and use trained personnel effectively. There were only few surgeons who could do both diagnostic and therapeutic procedures.

The data was analysed with Microsoft excel 2007 and SPSS 24.0 for mac.58 patients over a period of October 2012 to April 2014 consented to participate in the study. The pictorial histograms were used to check if the data was normally distributed and where appropriate, either Chi-square or independent sample T test was used. A p value of <0.05 was considered significant.

The groups were similar in terms of age, parity, BMI, mode of delivery and menopausal status (Table 1). There were more women with significant co-morbidities in the outpatient group than the daycase surgery group but it did not reach statistical significance (Table 1). In both the groups most of the women were parous and had achieved normal vaginal delivery. 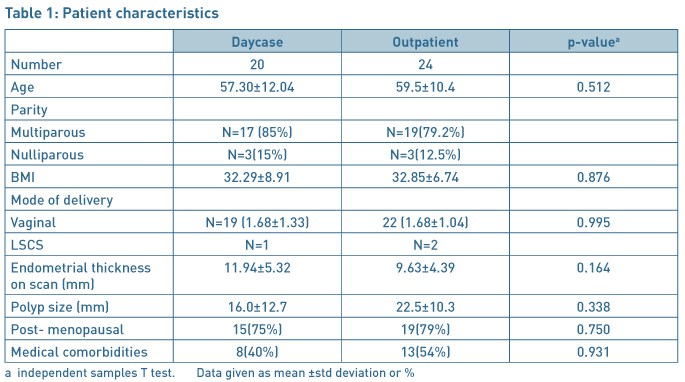 The size of the polyp ranged from 20–30mm in outpatient group and 20-50mm in daycase surgery group. The patients who had polyps more than 30mm were booked for daycase surgery. The most common indication for referral for hysteroscopy was the post-menopausal bleeding with 13/20 (65%) and 17/24(71%) in daycase and outpatient groups respectively. Other indications were menorrhagia, irregular bleeding and incidental finding of polyp on the ultrasound scan.

17 % of patients in OPHP and 20% of patients in daycase group did not receive the pre-operative leaflet. In the OPHP cohort, patients did not take any oral analgesia prior to coming for the procedure. In 14/24 (58%) cases local analgesia (lignocaine 1% with 1:200,000 adrenaline) was used. In one patient, OPHP procedure had to be abandoned because of the pain and in one patient, there was no documentation for the use of local analgesia. Vaginoscopy was attempted in 3 patients but one of them needed cervical dilatation and speculum insertion, while the other 2 had successful vaginoscopy. Most patients had mild to moderate pain as shown in table for visual analogue score (Table 2).  All the histology samples were followed up in each group and in one case adenocarcinoma of uterus identified on histology.

The mean time in recovery room just after the operation and mean time for discharge from the hospital was significantly different for both the groups as shown in Table 3. The polyp removal was successful in 23/24 (96%) women in the OPHP group. The patients were highly satisfied or satisfied with the explanation of the procedure in both the groups apart from 2/20(10%) patients in daycase group who were dissatisfied with the services provided as daycase.

Our study highlights that the outpatient management of endometrial polyps is safe, efficacious and feasible as supported by other studies(5–7). In a study by Litta et al(7), 253 polyps were removed as outpatient procedure with median time of 10min and a VAS ≤4 was obtained for polyps were ≤2 cm and menopausal status and vaginal deliveries were not significantly related to the VAS (visual analogue pain score). In our study, 7(42%) patients had VAS ≤4 and 12(50%) patients had VAS of 5-7 in OPHP. The mean VAS score was 4.69 for OPHP and 5.57 for daycase after the operation for daycase group, which did not reach statistical significance, most likely due to small numbers.

The time taken for the resumption of daily activities and the return to work was also less in the OPHP group then the daycase group, though not statistically significant. Our data demonstrates statistically significant reduction in recovery and discharge times as compared to daycase group. The mean time for discharge in daycase group was 126 min and 23.2 min for outpatient cohort (P=0. 0001). Similarly, in a randomised controlled trial by Marsh et al(5) women from the outpatient cohort had a significantly faster mean return to preoperative fitness (1 [0–4] day versus 3.2 [1–13] days; P = 0.001) and required less postoperative analgesia than the daycase cohort; women undergoing outpatient endometrial polypectomy had a significantly shorter mean time away from home than those undergoing the daycase procedure. This is likely to have significant positive implications on the bed capacity and the costs involved in achieving the treatment for women.

The Versapoint electrode fits easily into the semi-rigid hysteroscope and provides removal of polyps under direct vision. This ensures complete removal of the polyp and hence the better resolution of the symptoms. The average polyp size in our study population was 2–3 cm and was mostly single polyp. In our unit, most of the daycase polypectomy procedures are still performed as a blind procedure.

We would also like to emphasize that most patients done as OPHP cohort had significant morbidities including previous deep vein thrombosis, cardiac bypass, hypertension, diabetes, unstable angina and obstructive sleep apnoea which can prove challenging for general anaesthesia. The risks of general anaesthetic are conveniently avoided in the outpatient procedures.

The accessibility of OPHP services and shorter waiting time is likely to lead to quicker histological diagnosis. This could help us to lead to give prompt counselling and treatment in pre-cancerous cases. In terms of financial implications, the cost of surgeon, 2 nurses, kit and drugs for outpatient procedure was £423 while inpatient costs for surgeon, anaesthetist, nursing staff, drugs, kit and inpatient bed was £958.68. So there was a net saving of £535 per patient.

A recent review of ambulatory hysteroscopy by Cooper et al suggests that the current literature on these outpatient hysteroscopic techniques has demonstrated safety and feasibility, but evidence of effectiveness, patient acceptability and cost-effectiveness is lacking8.

Our success rates were good and only 1 patient needed to be booked for inpatient procedure because of pain and inability to gain access. The reason for our higher success rates is that all the patients booked for OPHP were initially assessed first by diagnostic hysteroscopy. This resulted in not only high success rates but also better utilisation of services with appropriate allocation of time and staffing for the procedure lists. Our study demonstrated that, indeed, 96% of patients were satisfied with the outpatient hysteroscopy services.

To conclude the OPHP is cost-effective and efficient method with reasonable acceptability. It is well tolerated with remarkable success rates and excellent patient satisfaction. As compared to daycase group, it requires less time for recovery and sooner returns to work. 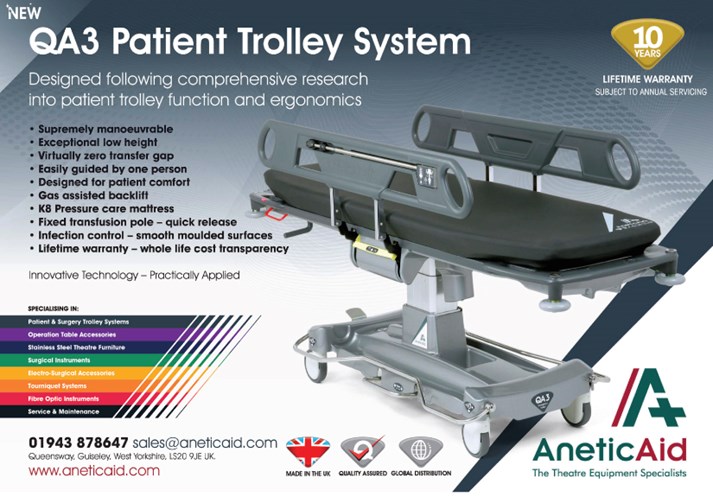 Cite this article as https://daysurgeryuk.net/en/resources/journal-of-one-day-surgery/?u=/2017-journal/jods-273-2017/clinical-outcomes-and-patient-satisfaction-following-inpatient-or-outpatient-hysteroscopy-and-polypectomy-a-service-evaluation/