Conflict of Interests: No conflict of interests or sources of funding to disclose.

Methods: Retrospective review of case notes in a day case procedure unit dealing with local anaesthetic excisions. Change of practice was achieved by dissemination of preliminary audit results, introduction of a checklist at the point of operation note completion and education of relevant clinicians. The audit was repeated following intervention.

Results: Recording of procedure time rose from 0% to 100%, logging of operative findings and operative diagnosis improved from 80% to 100% and a detailed postoperative note from 60% to 94%. Date, name of procedure, closure technique and signature were recorded 100% of the time in both rounds of analysis.

Conclusion: Education and efficient record prompts lead to improvement over time in operation notes, demanding systemic reform of standard proformae currently in use. Further longitudinal studies could be done to determine if the improvement is sustained over time.

Medical record keeping has experienced increased scrutiny and quality improvement in recent years driven by increases in medicolegal claims[i], with a total increase from £0.44 billion to £1.98 billion of claims costs between 2006-07 and 2016-17 within the UK[ii]. Procedure records should include site and side where applicable, and the use of diagrams is recommended[iii]. The RCS Good Surgical Practice (GSP) document outlined 18 criteria to be recorded during each operative procedure ranging from date to signature. When well done, these allow another clinician to “assess the care of the patient at any time[iv]”. Such guidelines provide a reference point for local audit and a skeleton for new operation note proformae[v][vi]. This audit aimed to snapshoot the faithfulness with which  general surgical day case procedures were recorded in an urban acute hospital, and further outline challenges and learning points to sustain rigour and accuracy.

Retrospective review of 20 then 17 case notes in 2 separate phases was undertaken from March to July 2018. All were elective day procedure cases under local anaesthetic; predominantly excision of skin lesions. All notes were hand written on a standardized day surgery booklet. A modified list of 10 of the original 18 criteria from good surgical practice were checked for, and any comment addressing these fields were considered sufficient, with the exception of “Detailed operative instructions” were there had to be at least a 2-point plan postoperatively.

The findings of the first collection of data and the guidelines were discussed with all members of the team before the second cycle was commenced. For consistency the operation note proforma was not changed in the interim, but clinicians attempted to meet the standard while working within the existing proforma with an RCS checklist as a guide available at point of writing.

Dissemination of the guidelines and aide-memoire led to an improvement in detail. Lack of recording of time of surgery on the operation note itself was significantly improved, but may have been originally recorded elsewhere in the proforma. The operative findings, alterations in tissue and postoperative instructions, are inexhaustible sections of the operation note at any time, but saw notable improvement. The improvement in postoperative care directives betrayed a level of pre-existent clinical thoroughness awaiting more detailed transcription. Potential causes include mental and motivational fatigue (all procedures were carried out after 2pm on a Friday afternoon), an outdated proforma, lack of legibility in some cases and human error. Argument could be and has been made for an electronic record with mandatory fields completed before the document can be saved[vii], however in this approach clinicians suffer the same fatigue as in hand-written notes and without the option to draw diagrams, diagrams which may encompass as many as  5 of this audits’ 10 data points. It is also to be noted that a discharge letter of the entire episode was dictated shortly after, and may have included some otherwise omitted details whilst denoting a time of completion. Overall improvement given correct written prompts led to a redesign of the surgical proforma, with less overall fields and operative diagnosis, details of local anaesthetic and a stitch removal prompt added. The proforma was also reduced from an 8 to a 4 page booklet to consolidate the focus of salient points against fatigue. 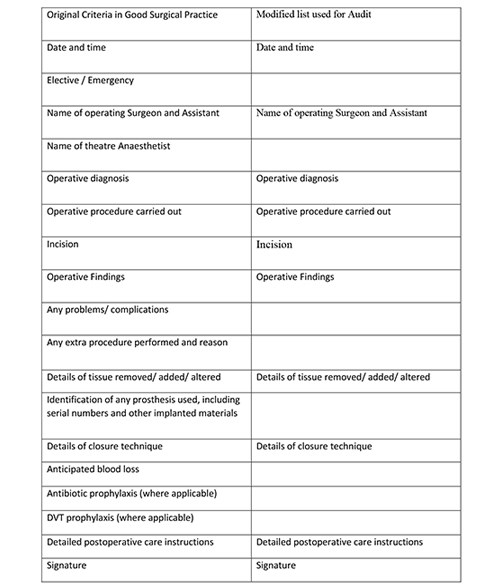 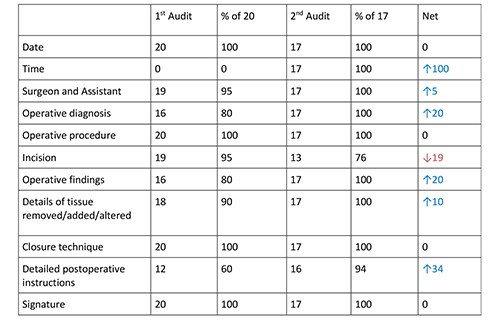 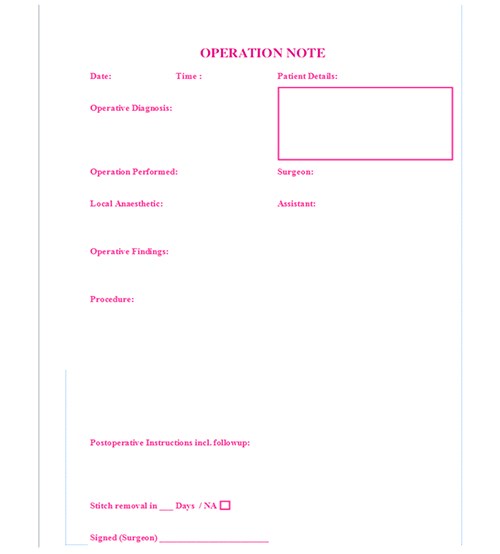 Cite this article as https://daysurgeryuk.net/en/resources/journal-of-one-day-surgery/?u=/2019-journal/jods-294-november-2019/improving-operation-notes-in-day-case-surgery/