Introduction: Antibiotic prophylaxis for transrectal ultrasound biopsy of the prostate (TRUS) is well established. Quinolones are used in many centres. However, the most effective regimen is not known and the choice is based on local resistance profiles. Our local protocol consisted of 750mg ciprofloxacin two hours pre-biopsy, 400mg metronidazole PR post-biopsy and a 5/7-day course of 500mg ciprofloxacin BD.

Methods: We retrospectively reviewed 160 consecutive patients undergoing TRUS biopsy over a 3-month period from November 2016 to February 2017. Blood & urine cultures were noted and any positive cultures were reviewed a microbiologist. After liaising with our microbiology department, a new antibiotic protocol was introduced consisting of a single dose of ciprofloxacin 750mg two hours prior to the procedure. A re-audit was then undertaken from September to December 2017 consisting of 109 consecutive biopsies.

Results: With the existing protocol 2 patients (1.25%) had positive cultures; both were admitted with sepsis. Both patients grew E. coli, one was resistant to ciprofloxacin on a previous culture and neither was sensitive to metronidazole.

On the new protocol, three patients (2.8%) had positive cultures. One patient grew E. coli resistant to ciprofloxacin, one Enterococcus and the other grew Acinetobacter. There was no significant difference between the groups.

Conclusions: A reduced and simplified antibiotic protocol does not increase the risk of infection after TRUS biopsy. Patients should be screened for ciprofloxacin resistance prior to the procedure. Patients developing sepsis appear to have atypical or ciprofloxacin resistant organisms on culture. Reducing antibiotic usage could reduce cost, side effects and potentially the development of resistance.

Antibiotic resistance has been described as the greatest threat to modern medicine [1].

Transrectal ultrasound guided prostate biopsy (TRPB) is the most commonly used technique for acquiring histology for the diagnosis of prostate cancer. The insertion of needles through the rectal mucosa breaches this natural barrier and can inoculate the prostate with gut commensals, most commonly Escherichia coli (75-90%), Klebsiella pneumoniae & Pseudomonas aeruginosa [2]. Complications occur in up to 50% of patients with 0-9% developing a urinary tract infection (UTI) and 30-50% of these also associated with bacteraemia [3] [4] [5] [6] [7]. Antibiotic prophylaxis reduces the risk of infection but an ideal antibiotic regimen has not been agreed and BAUS advise that regimens should be decided based on local antibiotic resistance profiles [8].

Fluoroquinolones (FQs) are the antibiotic of choice for TRPB due to their bactericidal activity against Gram-negative bacteria, good bioavailability after oral administration and higher-than-serum concentrations in urine and prostatic tissue [9] [10]. Ciprofloxacin reduces the infection rate when compared with placebo [6] [11] [12] [13] but has not been shown to be superior to any other antibiotics (such as chloramphenicol and trimethoprim-sulfamethoxazole) [13]. Several authors and systematic reviews have found that a single dose of ciprofloxacin has equivalent prophylaxis to a prolonged course [6] [11] [13] [14]. However, it is ineffective against anaerobic organisms. Side effects from FQs are experienced by up to 20% of patients and are dose dependent. They include gastrointestinal upset (diarrhoea (6%), nausea (3%), vomiting (2%) & development of C. difficile), musculoskeletal (tendonitis (1%) & arthropathy (15%)), CNS (dizziness (1%), headache (1%) and cardiotoxicity (prolonged QT & torsade des pointes) [15].

Infection after TRPB is increasing. During the ERSPC trial (1993-2011) [16] there was a 10% increase in the incidence of hospital admission and up to four-fold increases have been observed in large series from the USA [17] and Canada [18]. This increase has been attributed to FQ resistance [18] which in turn has been correlated with FQ use in the community [19]. Risk factors for FQ resistance are previous positive culture, previous antibiotic use, recent hospital admission and international travel [20] [21].

Metronidazole is commonly used as a suppository after TRPB but evidence supporting its use is limited [22]. Two case reports from the 1970s describe sepsis arising from anaerobes after TRPB [23] [24] but we are unable to find any more recent studies, and no randomised controlled trials, supporting its use.

In a recent Cochrane review, the majority of studies used pre-biopsy enemas; however, enemas did not reduce in bacteriuria, UTI, sepsis and hospitalisation rates. The only significant difference found when comparing antibiotics with combination (antibiotics + enema) was for bacteraemia. It also causes discomfort and increases costs [25]. Targeted antibiotic prophylaxis using rectal swab cultures have given some promising results in reducing post-TRPB infection rates [26] [27] but the logistics of obtaining pre-biopsy swabs and the increased burden upon the microbiology department were not deemed feasible at our institution and others [18] [28].

Our local prophylactic regimen had consisted of ciprofloxacin 750mg pre-procedure and then post-procedure a metronidazole 400mg suppository and five further days of ciprofloxacin 500mg BD. There is increasing focus on antibiotic stewardship with regards to side effects and particularly upon the emerging threat of ciprofloxacin resistance. As such, we undertook a service improvement project to determine the safety and efficacy of a reduced antibiotic regimen.

We examined the electronic records of all patients receiving TRPB during a 3-month period between November 2016 and February 2017. We recorded demographics, urine or blood cultures and hospital admissions for urinary sepsis within 30 days. All positive cultures were reviewed with our microbiology department and a new protocol was devised, reducing antibiotic prophylaxis to a single dose of ciprofloxacin 750mg 2 hours pre-procedure. We also began screening patients for ciprofloxacin resistance (previous resistant organisms, use of ciprofloxacin in previous six months) and gave these patients gentamicin prophylaxis. Six months after introducing this new protocol the audit was repeated for another 3 months. Statistical analysis was performed use the chi-squared test. There were no exclusion criteria.

160 patients were identified for our first audit. 13 patients had urine cultures performed for various reasons (8 for routine pre-operative assessment, 3 for suspected UTI in the community) but all were negative. 3 patients (1.9%) were admitted with suspected urosepsis (Table 1).

118 patients were identified for our re-audit. 108 patients received a single dose of ciprofloxacin and 10 patients received alternative antibiotics prophylaxis after screening (usually gentamicin IV unless otherwise advised by our microbiology department). 4 patients had urine cultures performed for various reasons (2 for haematuria, 2 for suspected UTI) but all were negative. One asymptomatic patient grew Enterococcus on a catheter urine sample at routine pre-operative assessment and was not considered clinically significant. 2 patients (1.7%) were admitted for suspected urosepsis.

No cultured bacteria in either group were sensitive to metronidazole.

There was no significant difference in the proportion of patients admitted with suspected urosepsis (p=0.91), who had positive blood cultures (p=0.76) or urine cultures (p=0.75) between the two groups.

Our results show no significant difference in the between the groups for the primary outcomes after rationalising the antibiotic regimen and our department has accepted the new antibiotic prophylaxis regimen. Our hospitalisation rates are comparable to a systematic review published in 2016 (1.0%; 95% CI 0.1-5.0%) without the use of enemas or rectal swab cultures.

One patient with a positive urine culture was excluded because the specimen was from a routine pre-operative catheter sample and the patient was asymptomatic, and therefore does not meet the EAU definition of catheter-associated UTI [29]. We included the patient that grew Acinetobacter spp. in our results because although this was probably wasn’t the causative organism the patient was still admitted with suspected urosepsis.

On the existing protocol, one of our patients received ciprofloxacin prophylaxis despite having a previous culture with ciprofloxacin-resistant bacteria. The use of a FQ or hospital admission within the previous year is associated with increased risk of isolating FQ-resistant E. coli [30]. In these cases, our protocol recommends using intravenous gentamicin 3mg/kg. Both of the patients admitted with urosepsis on the new protocol were appropriately screened and received ciprofloxacin prophylaxis.

Ciprofloxacin resistance in our study was low (2 out of 23 cultures, 8.7%) but 40% of the patients admitted with suspected urosepsis grew ciprofloxacin-resistant bacteria. The empirical use of FQs for UTI has been associated with the rapid emergence of resistance [30] and the rates of resistance are increasing [18]. No patient on our new protocol would have benefitted from an extended course of ciprofloxacin and by reducing the total dose we hope to reduce the development of resistance.

Data from the British Society for Antimicrobials and Chemotherapy show that bacteraemia resistance of E. coli to ciprofloxacin nationally in 2016 was approximately 16% with corresponding gentamicin resistance being approximately 6% [31]. Ironmonger et al reported in 2015 rising linear trends of resistance in E. coli and Klebsiella pneumoniae to ciprofloxacin and cephalosporins between 2010 and 2013 [32]. In our series, all cultured bacteria were sensitive to gentamicin. By routinely using gentamicin prophylaxis we may have prevented some, or all, of our admissions. However, this risks toxicity to the patient and would require increased resources intravenous cannulation or injection. No patient in our study would have benefitted from metronidazole and evidence for its use is scanty [22].

The drawbacks of our audit are that it is from a single centre and that the true incidence of infection may be greater than our results reflect. This is because some patients may have been treated empirically by primary care or may have presented to hospitals outside of our Trust, which may explain why no patient had a positive urine culture without urosepsis. However, the risk of this error was the same for both groups.

We have shown that changing antibiotic prophylaxis from a multi-drug and multi-day regimen to a single pre-operative dose does not have a detrimental effect to patients. It reduces cost, side effects and may help to combat antibiotic resistance. 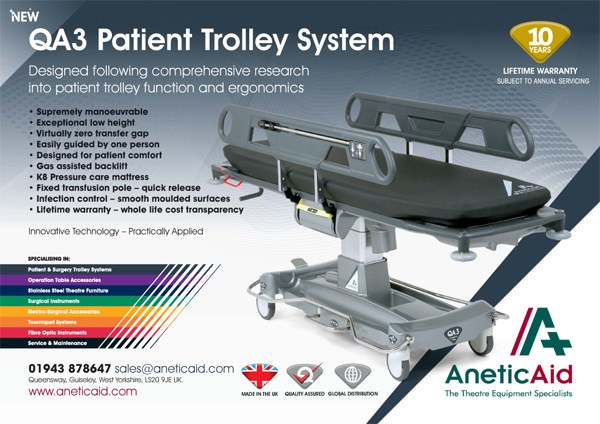 Cite this article as https://daysurgeryuk.net/en/resources/journal-of-one-day-surgery/?u=/2019-journal/jods-291-february-2019/reducing-the-antibiotic-burden-for-transrectal-prostate-biopsy/