Introduction: The treatment of gallstones disease is evolving, with an emphasis on early cholecystectomy following index admission with biliary problems. This report outlines our experience in implementing a pathway for day case emergency cholecystectomies.

Methods: A pathway for people with symptomatic gallstone disease was designed, and two theatre lists per week were allocated to “hot cholecystectomies”.  Patients are discharged if well enough and brought back for a day case procedure, with the aim of 80% undergoing surgery within 14 days of admission.

Results: 170 patients underwent emergency cholecystectomy between January 2017 and March 2018. Over this period 80% of patients had their surgery within 14 days, ranging from 54% to 100% on a monthly average. Mean time from emergency admission to surgery was 7 days. 71% were discharged and brought back for surgery. 46.5% overall were discharged on the same day as surgery. Readmission rate was 5.3%.

Conclusion: Early cholecystectomy is a recommended treatment for acute gallstone disease, and our experience demonstrates that it is possible to perform this on a day case basis in the majority of suitable patients.

The treatment of acute gallstone disease has evolved in recent years with an emphasis on early surgery to improve outcomes. The National Institute for Health and Care Excellent (NICE) currently recommend performing cholecystectomy within one week of diagnosis of acute cholecystitis1 and the British Society of Gastroenterologists recommend surgery on index admission for gallstone pancreatitis, or within 2 weeks if this is not possible2. This has been shown to result in lower morbidity, shorter length of stay and duration of antibiotics, as well as reduced costs, with no associated increase in complications3-5.

The Royal College of Surgeons launched a pilot project (CholeQuIC)6 in January 2017 to investigate the feasibility of implementing this as a national standard. This article describes our experience of this process and outlines our results.

Upon enrolling in the CholeQuIC project we began by designing a pathway for the diagnosis and management of gallstone disease (see Figure 1). Patients were deemed eligible for hot cholecystectomy if they had acute cholecystitis, gallstone pancreatitis or biliary colic severe enough to require admission and were medically fit for surgery.  Those with non-resolving obstructive jaundice were included once they had undergone endoscopic retrograde cholangiopancreatography (ERCP). There was much debate among the sites involved as to an achievable target timeframe for surgery. The CholeQuIC aim was for 80% of patients to undergo surgery within 8 days of admission. We felt this was not realistic for our site and set our own target of 80% within 14 days of admission. 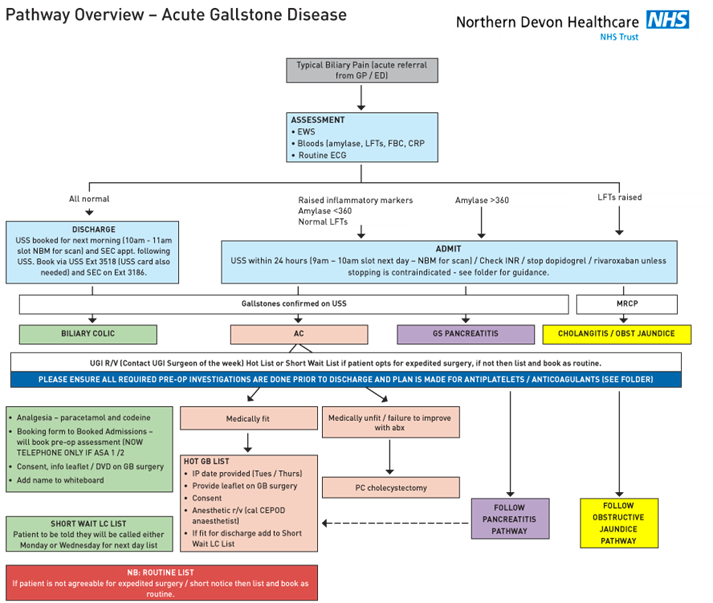 Two theatre lists per week were allocated to “hot cholecystectomies” which gave us capacity for four cases per week. The four operating consultants rotate on a weekly basis. Lists took place in the mornings, in an emergency general surgery theatre. These theatre sessions were created in addition to pre-existing, emergency capacity and, therefore, time was, protected for “hot cholecystectomy” use except in the event of a life-threatening emergency. This negated the issue of placing cholecystectomies on the emergency operating list and being cancelled for more urgent procedures, as is a common problem in many institutions.

Initially cases were all performed on an inpatient basis during their index admission. It quickly became obvious, however, that some of these patients were well enough to be discharged whilst waiting for their surgery. We therefore altered our pathway to create a day case emergency cholecystectomy system. The patients have all their required pre-operative investigations performed whilst they are an inpatient (electrocardiogram (ECG), blood group and save, HbA1C) and have a pre-operative assessment booked before they leave. If they are American Society of Anesthesiologists (ASA) grade 1 or 2 they are able to have this assessment by telephone. In most cases they are given a date for surgery before they are discharged, however, some patients required a further assessment by an anaesthetist in which case their name was recorded on a white board and they are listed once deemed fit to go ahead. On the day of surgery, patients present to the day surgery unit, are booked in and undergo surgery that morning. Discharge on the same day as surgery is the default pathway in all eligible patients. Patients not eligible for day case surgery are identified at the time of booking onto the waiting list or at pre-operative assessment and are admitted to the ward post-operatively. Such patients include those without a suitable carer available in the post-operative period and those with significant medical co-morbidity (e.g. ASA 3) requiring overnight monitoring of observations.

Between January 2017 and March 2018, we have performed 170 emergency cholecystectomies.  The breakdown of diagnosis is shown in Table 1. Between 8 and 20 patients were enrolled onto the pathway each month. Three lists were cancelled during this period – two for emergency laparotomies and one for an organ harvest.  Overall 136/170 (80%) of patients had their operation within 14 days of emergency admission, with the monthly rate varying from 54% to 100%, see Figure 2). Average (mean) time from emergency admission to surgery was 11.4 days (range 1-191 days). After initial admission, 71% patients were discharged and brought back for day case surgery. The remainder had surgery as inpatients. 46.5% patients overall were discharged on the day of surgery (see Figure 3). The day case rate was higher in the patients who had been discharged prior to surgery compared to the inpatient group (63% vs 8%, P<0.0001, Fisher’s exact test). Average (median) length of stay on the index admission was 3 days (range 0-19 days) see Figure 4.

At a mean follow up of 216 days (range 6-463 days), nine patients (5.3%) were re-admitted post-operatively with complications. Two had common bile duct stones and required ERCP; two developed wound problems requiring inpatient assessment/treatment; one developed a bile leak and required re-operation-, one patient developed gastroenteritis post-operatively and one had possible pancreatitis but with normal liver function tests so no imaging was undertaken. The final two were readmitted with post-operative pain but no cause was found.  Seven (4.1%) cases were converted to an open procedure.

Table 1: Breakdown of cases by diagnosis.

Figure 2: % of cases performed within 14 days of admission. 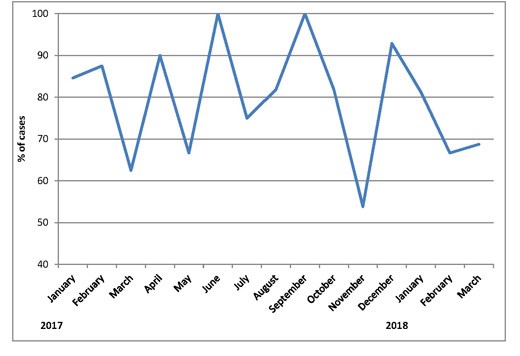 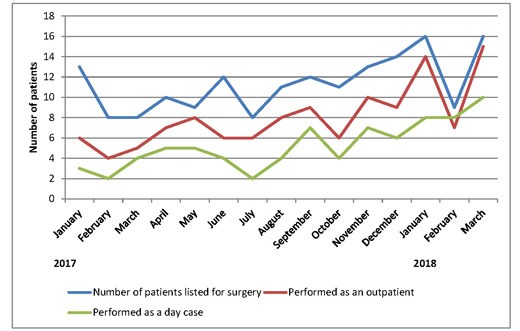 Figure 4: Average length of stay on index admission by month. 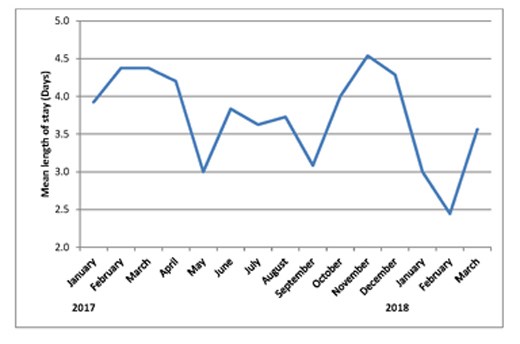 Implementing this change has been challenging, however, we achieved our target rate of 80% of patients having cholecystectomy within 14 days of admission. Our conversion and readmission rates are consistent with those published in the literature7-10 and the proportion performed on an outpatient, day case basis are increasing month on month. Patients undergoing surgery as an inpatient are less likely to have a day case procedure, which is expected in a group who are more unwell with higher pre-operative pain levels. Our aims for the future are to maintain these standards and continue to increase our day case rates in a bid to help reduce the financial burden of an increasingly common condition.

Cite this article as https://daysurgeryuk.net/en/resources/journal-of-one-day-surgery/?u=/2018-journal/jods-282-june-2018/hot-cholecystectomies-implementation-of-a-day-case-pathway-kelly-anne-ide-david-l-sanders-david-m-bunting/