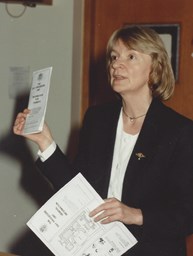 Sandra Meaden’s nursing career was committed to the development of day surgery and she achieved a huge amount both locally in Norwich and nationally through her role as a Council member and treasurer for the British Association of Day Surgery and as a founder member of the Royal College of Nursing Day Surgery Forum.

Sandra’s first achievement was the opening of the short stay ward at the old Norfolk and Norwich hospital, Claxton ward. Following that success, she was appointed as Day Procedure Unit Nurse Manager and together with David Ralphs the Director of Day Surgery, was a key figure in the commissioning and subsequent running of the first Arthur South Day Procedure Unit which was a truly innovative unit and fore runner of many of the day surgery units now in existence in nearly every hospital in UK.
Her experience in day surgery was recognised with her election as a Council member to the British Association of Day Surgery Council in 1995 and subsequently as Treasurer. Her colleagues in BADS remember her as always speaking from a wealth of experience, to be relied upon to deliver any project she was asked to undertake and as treasurer, an efficient and conscientious custodian of the Association’s finances. She was a delightful colleague retaining more than a hint of her Welsh roots and a whole-hearted participant in the Ceilidhs which were an integral part of the entertainment at BADS ASM in the past.

Sandra’s skills in management were continuing to develop and she became the service manager for DPU and plastic surgery and achieved an MBA in Business studies in 1997. She was actively involved in the planning and commissioning of the 6 theatre Arthur South day procedure unit at the new Norfolk and Norwich University Hospital. The fact that together these two units were awarded three Charter Marks over a 12-year period reflects Sandra’s ability to build around her a dedicated team that continued to provide excellent care. She was subsequently appointed as general manager for service improvement and inevitably the development of day surgery services remained a key focus. Sandra was always prepared to take on a new challenge, however difficult and give it her best shot, and her commitment to the introduction of Choose and Book in Norwich in 2001 was one such project.

Her final major project was to lead the rebuild and planning of the new Cromer Hospital on the Norfolk coast between 2003 and 2012. She worked closely with the operational team, architects and the construction company spending hours planning and developing existing and new services that would be suitable for transfer into the new day case facility. Under her leadership services such as pain management, simple chemotherapy, laser varicose vein treatments and one stop urology sessions were introduced in the new Cromer hospital. They ensured treatment closer to home for patients and expanded the remit of day surgery treatments. In the first three years, the new Cromer hospital saw a large increase in day procedure treatments for patients - treating its 500,000th patient in autumn of 2015. Sandra's expertise and determination to make the hospital visit for patients a smooth and efficient experience was evident throughout this period. Despite many challenges during the rebuild of Cromer hospital including withdrawal of additional funding, possible listed building status and the bat preservation trust, Sandra kept the teams focus on the task in hand and promised that she would not begin her (well deserved) retirement until the new Cromer hospital opened. The new hospital opened finally on 20 March 2012 and Sandra retired on 31 March 2012 - her vision achieved. After her retirement, she continued to contribute with her work for the Friends of the Hospital.

Colleagues who worked with Sandra for many years recall her as a very lovely, strong willed lady, who led by example and never appeared daunted by the challenges of working in the NHS. She instilled her interest in day surgery in many of those she worked with, including many of the current staff in DPU in Norwich. She inspired and more importantly, encouraged people to look inwards, enabling them to reach their full potential; she believed in her staff and fought for her beliefs.

We feel so lucky to have known and worked with Sandra and I am sure she would be very happy for us to raise a glass (or two) in her memory and to celebrate all she achieved, especially the continuing development of the day surgery services in Norwich and the DPU team which she established in 1991.